On the road with PUR

Professional event technology and special construction for tour by PUR

A well-rounded affair on all levels: The 360° central stage, in-the-round sound system, giant moving LED saucer, video rotunda, octagonal pyro truss, and movable LED octahedron were a big hit. Delighted crowds, a happy band, and a fantastic atmosphere up front and behind the scenes would bear that out.

The show’s design is to CUE Design’s credit. The stage was developed in a joint workshop with the band. In keeping with the theme of the latest PUR album Zwischen den Welten (Between Worlds), the scenic array overhead the musicians opened up time and again to reveal the spaces in between. The dual-section video rotunda pulsated here and there to reveal an UFO-like LED disc bathed in bright light. That flying saucer soared and dived, angling back and forth between the band and video screen. The LED octahedron and the pyro truss provided a suitable dynamic frame for all the comings and goings.

All in all, it was a multidimensional set celebrating the spaces in between places with plenty of kinetic action and lots to discover above and on stage. The band heightened the drama with a dramatic flourish. It played the first two songs in a brightly lit hall with no gimmicks – just pure performance, eye to eye with the fans. Then the lights went down and the technical fireworks exploded. The rest was a shared adventure in song, sound and vision.

satis&fy delivered all the tech, including special builds. Our crew step up and tore down rigging that included custom steel builds, a rolling circular Litedeck stage with the CD cover printed on the floor, an audio system featuring in-the-round sound design, an LED saucer of our own make, the moving roundish truss with some 250 meters of Martin Sceptron LEDs, cameras and control desks to stream the on-stage action to the video rotunda, the lighting and video gear, and the stage kinetics courtesy of Cyberhoist.

satis&fy sent out 25 crew members on a 24/7 mission to ensure everything went smoothly. And it did, making this a well-rounded affair in every respect. When confetti and streamers rained from the ceiling, audiences set out on their journey home in a state of bliss after each and every one of the 13 shows.

Our take-away is this: When a band rewrites one of its songs and plays it in tribute to the technical crew during the final gigs, then everyone surely did everything right every time. 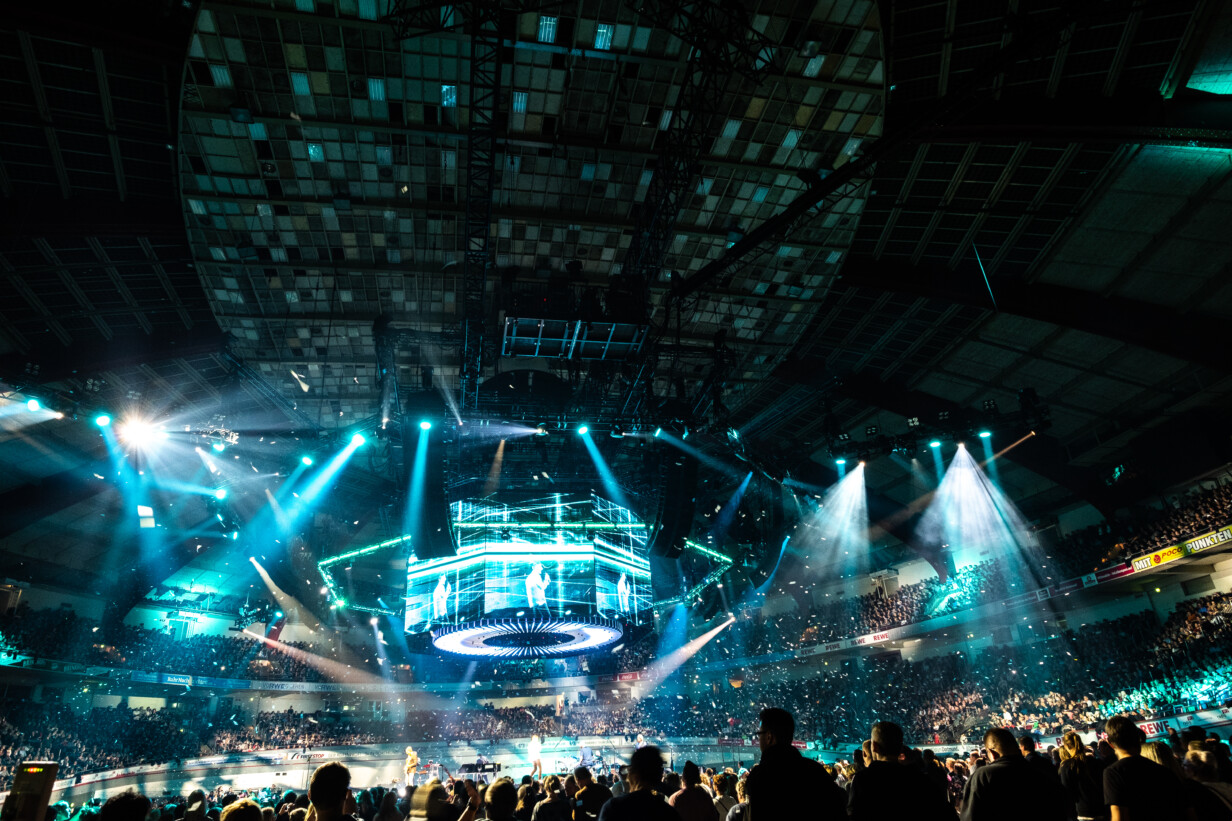 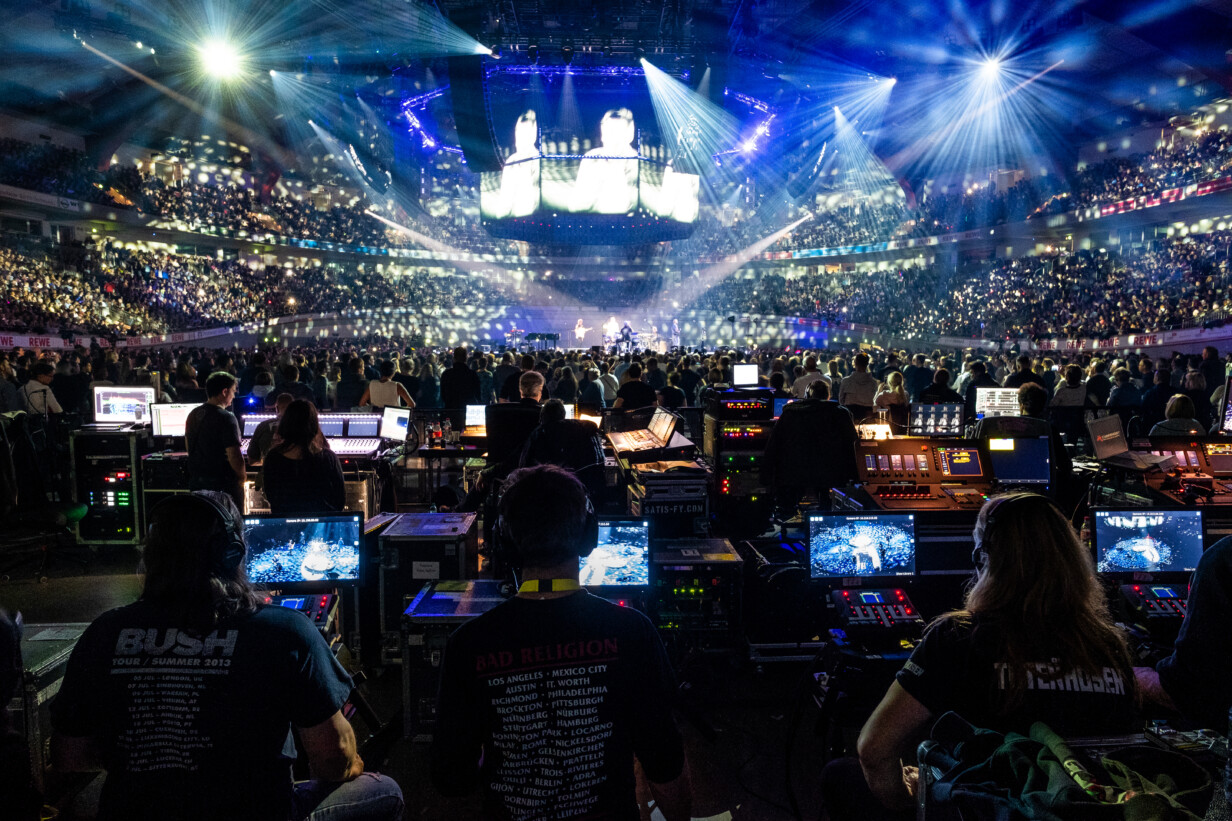 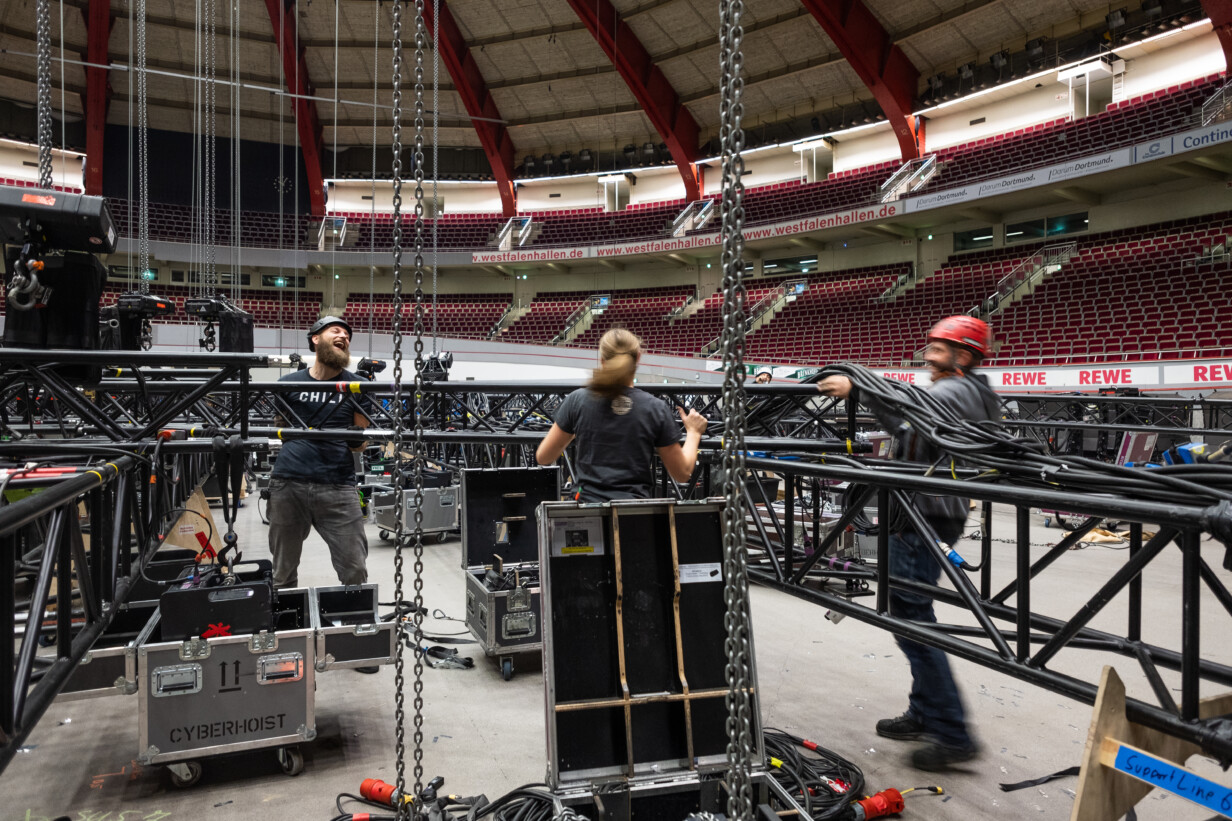 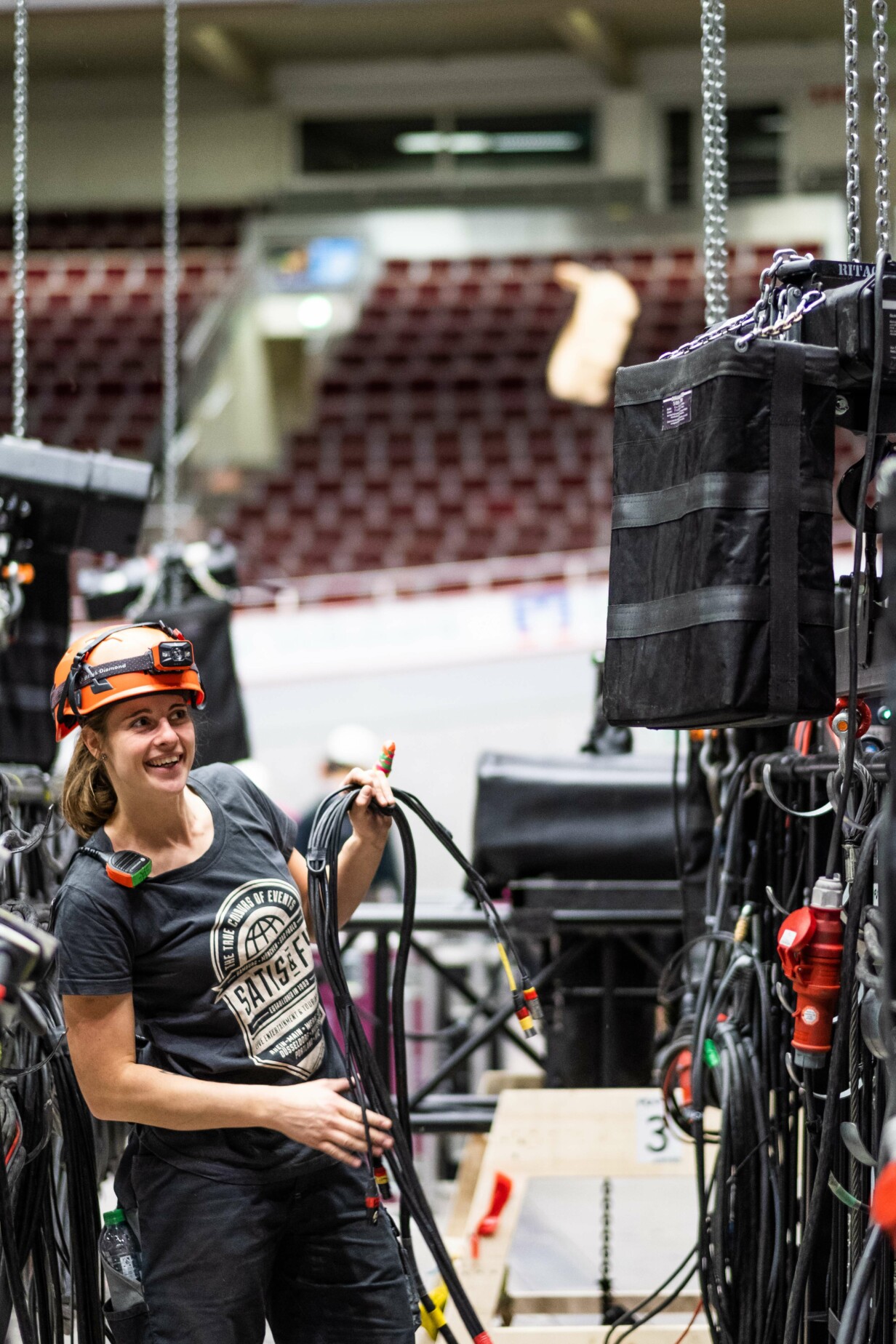 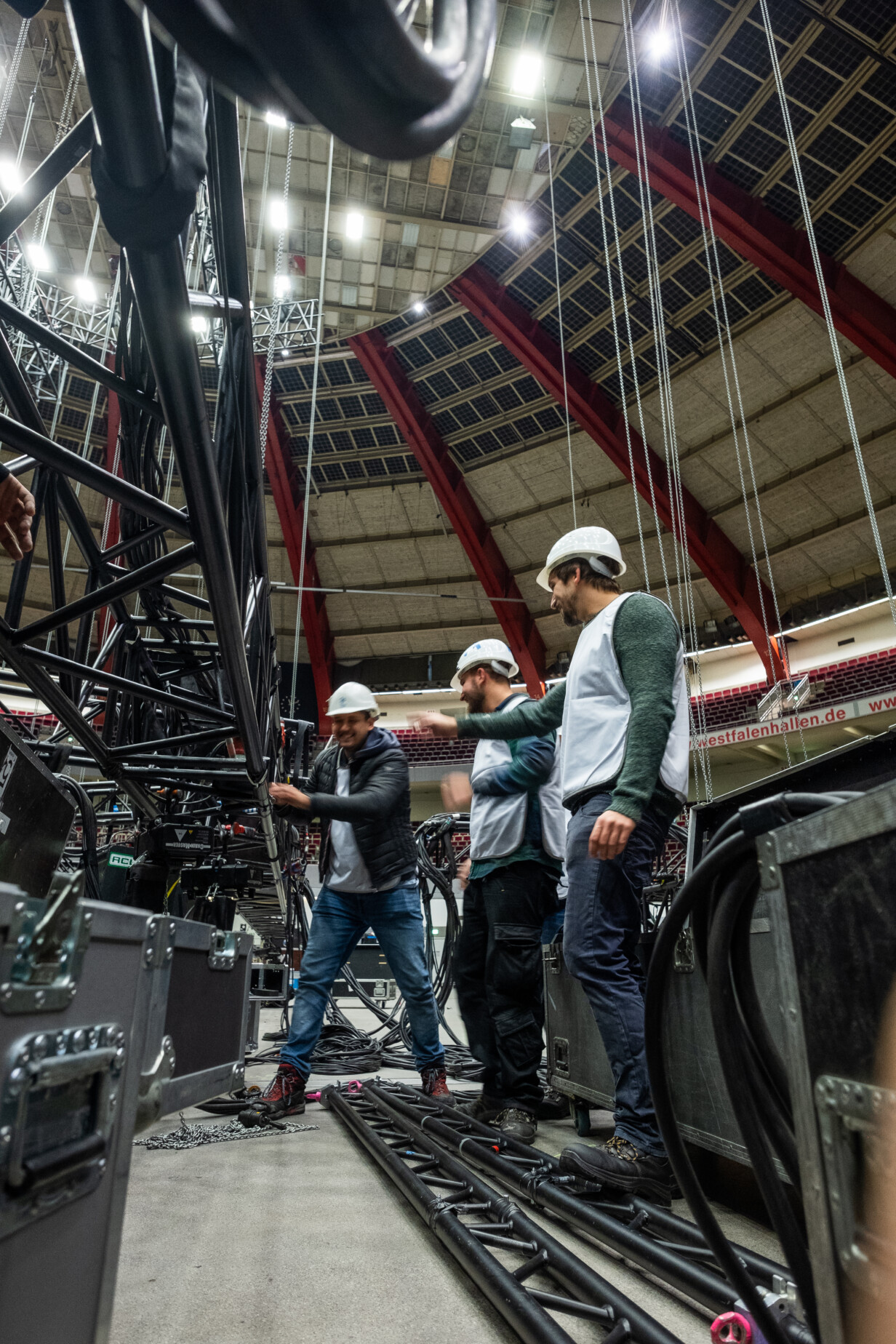 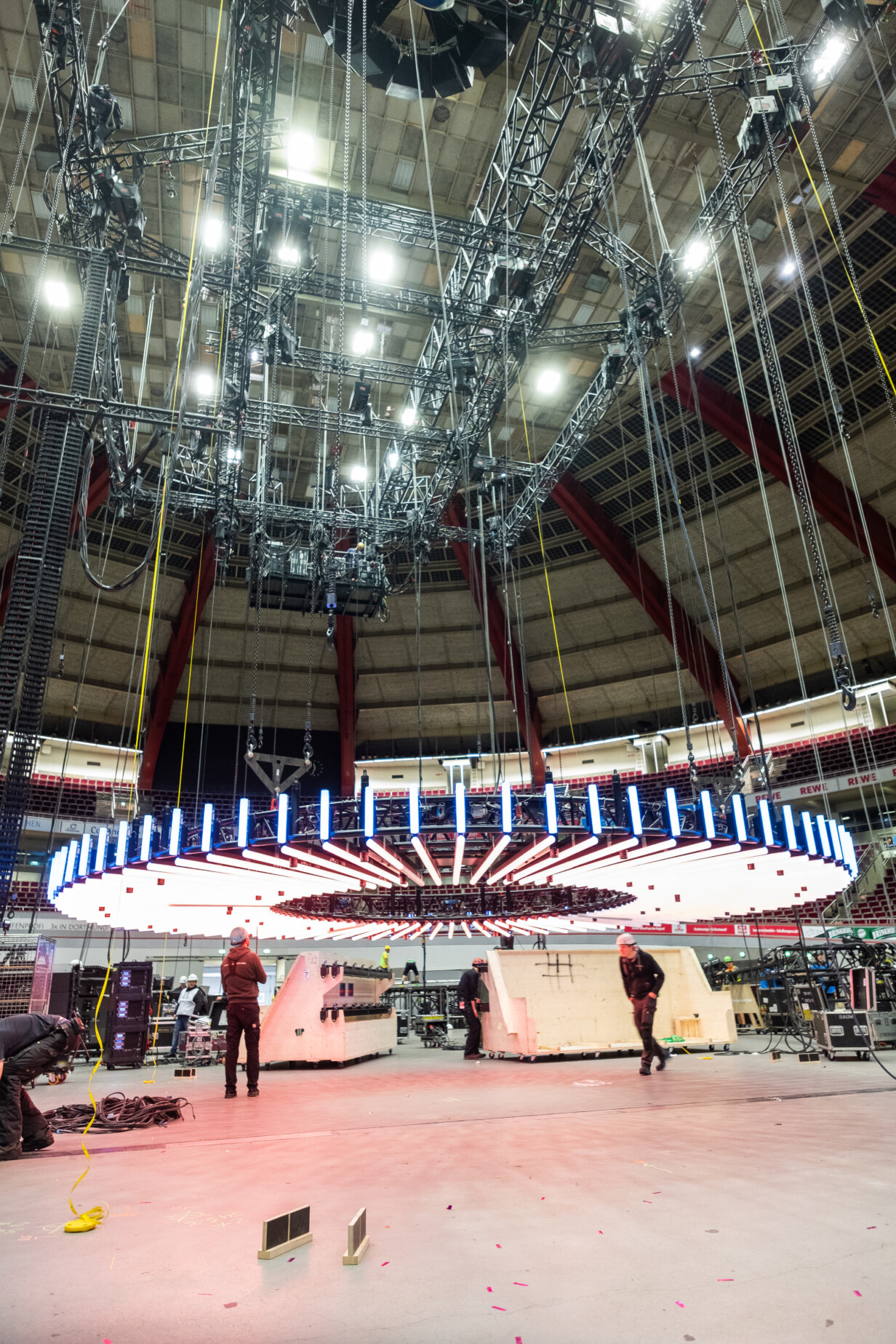 Your audience is our challenge!

Whether high wind speeds during thunderstorms or a more complex acoustic – our experts get everything under control and know how to thrill the masses.