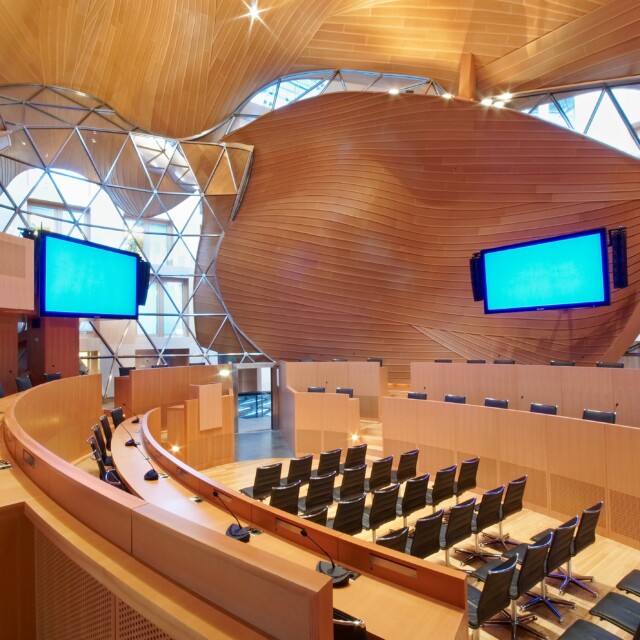 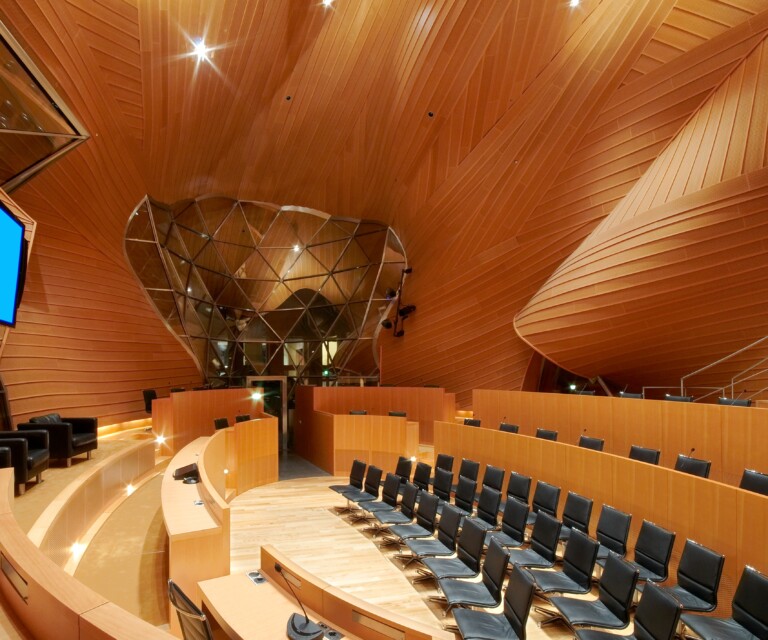 New media technology for the Plenum at Axica

Since 2012, the Plenum at AXICA, one of Berlin’s most exclusive conference and congress centers, has had a new look. satis&fy AG, a long-standing cooperation partner of AXICA, supported the operator and owner DZ BANK in planning the technical infrastructure and media equipment of the outdated part of the building.

We lifted the State Opera for everyone. We moved 12,000 people at Bermuda Fly. We lit up Berghain. A small conference room like the Plenum in the DZ BANK is quickly brought up to date – remaining the most spectacular, modern and extravagant that Berlin has to offer.

But how do the ideas of a bank meet those of a technology company? Isn’t every conference room just a conference room? Is the plenary always teetering on the edge? And is Frank O. Gehry ALWAYS complex?

A short summary of a well-known background: from 2007 to 2014, satis&fy worked with the exclusive conference and congress center AXICA alongside international customers from the fields of politics, business, sports and culture. The full-service event package included the complete technical conception and implementation of a wide variety of events – with permanent on-site support and our own technology warehouse. The headquarters of AXICA, the DZ BANK AG building on Pariser Platz in the historic center of the capital, still attracts many tourists every day. This may also be due to the proximity to the government district, the Brandenburg Gate, the traditional Hotel Adlon, the newly opened US Embassy and the directly adjacent promenade Unter den Linden. But the breath-taking architecture of the building designed by star architect Frank O. Gehry, which was completed in 2001, acts as a crowd attraction, even if the normal visitor is not allowed to go any further than the entrance. Located in the heart of Berlin with simple forms, clear structures and a classic, sober facade. An unmistakable Gehry is visible in the interior: organic shapes, high-quality, contrasting materials, surprising details, maximum functionality and spectacular dynamics. The centerpiece, the Plenum, offers a completely new sense of space as a walk-in sculpture equipped with the most modern technology that Berlin has to offer.

This – previously – the most impressive conference room in Berlin has now been extensively renovated and brought the satis&fy project management team to the brink of madness. Because the Plenum was special from the start. It was not part of the official opening of the DZ BANK building in 1999, and was only ready for use two years later. A good ten years later – the state-of-the-art technology at the time was naturally getting outdated. With its biomorphic shape and an outer skin of over 100 brushed stainless-steel plates, the 188m2 Plenum represented the most elusive and at the same time most sensitive space at DZ BANK. And it caused a few surprises, not only due to the complex space, but also due to the different ideas and realities of the planning team from satis&fy, DZ BANK and AXICA, who met when developing the renovation concept.

The capacity of the Plenum had to be increased from 85 people to almost 100. To do this, the old conference table in the inner oval section had to be replaced by a newly constructed boardroom table designed for a flexible set-up and breakdown while also offering various new seating arrangements (all of which had to be coordinated with Gehry in Los Angeles).

In addition, the room had to be even more flexible than before, and the lectern had to be able to be rearranged in a flash. Since there were no detailed construction documents, but only rudimentary documentation, all the panels were opened and examined. The video technology also had to be the largest and most modern available. The selected screens, 108-inch LCDs, were also used in the White House in Washington D.C. at the time. The entire cabling also had to be re-laid and, for that, the whole floor was torn open.

Even the wood expert “Schorsch”, who was involved in the original construction but had been retired for a few years, was persuaded to get together with the VEV Holzbetriebe Memmingen and recreate the difficult, wavy, sound-optimized wall panels made of wooden parts, which were all unique.

Despite all these challenges, the extremely complex project was completed after just a few months. A unique infrastructure was created that was integrated into the sculptural space. And the result is still visible and audible. More than 35 invisible transfer points with more than 400 connection options were created. The new fiber optic cabling (over 150 active connection points plus 100 more as backup) was particularly innovative in 2012. At the time, the sound system was completely replaced, and new LED-based individual speaker lighting was installed. The right ring was fitted with flexible wooden elements, creating new speaker positions and the possibility of installing a stage. The speaker’s position closer to the two gigantic, swivelling, yet lightweight-looking LCDs made it easier for the audience to follow the presentations. The conference audio system was also upgraded and enhanced with an interpreter system. Another highlight at the time was the control room on the upper floor, which had new lighting, sound and graphics control rooms and allowed two simultaneous image mixes.

At the official opening in mid-November 2012, Claus Kleber presented his book „Spielball Erde: Machtkämpfe im Klimawandel“ {“Toyball Earth: Power struggles in climate change”}. A beautiful prelude to the indefinable cloud floating in the atrium in the “Whale at the Brandenburg Gate”, as Berliners call the building due to its shape when viewed from a bird’s eye view. The curved stainless-steel shell and the undulating walls of the Plenum resemble this figure. Architect Gehry has repeatedly been inspired by water, the sea and fish for his structures in other buildings: “The shape of the fish is the perfect example of movement. I try to capture this movement in my buildings.” 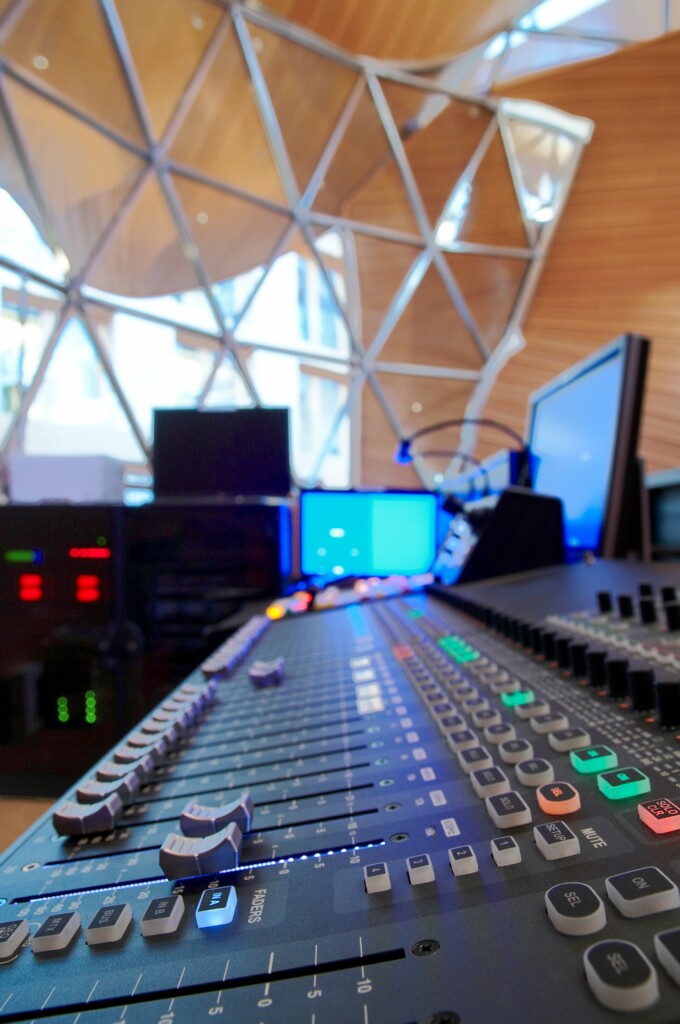 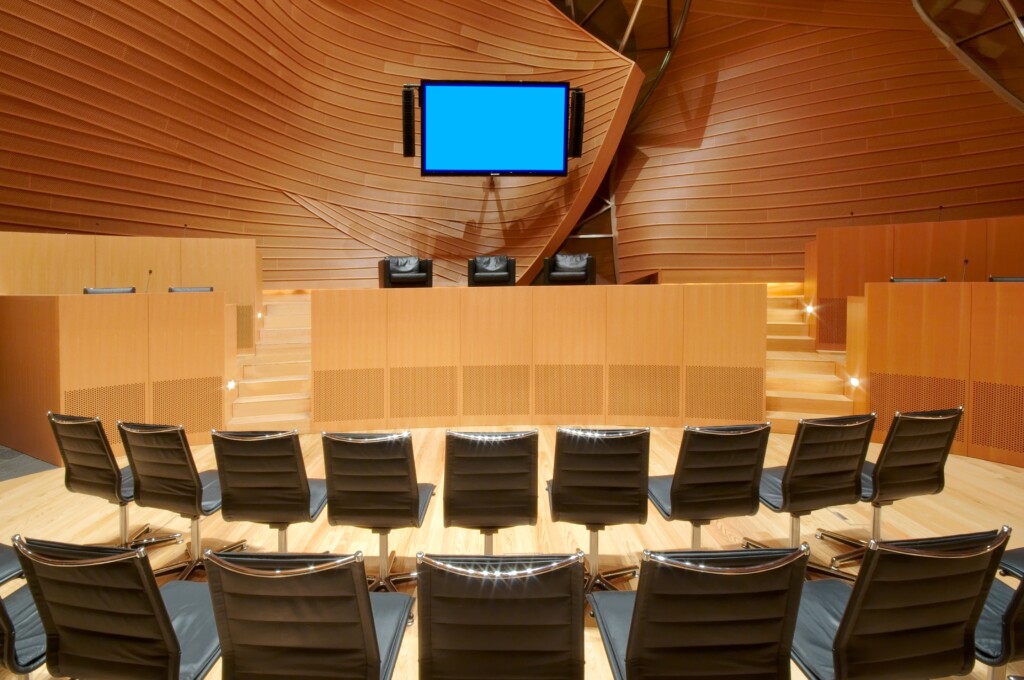 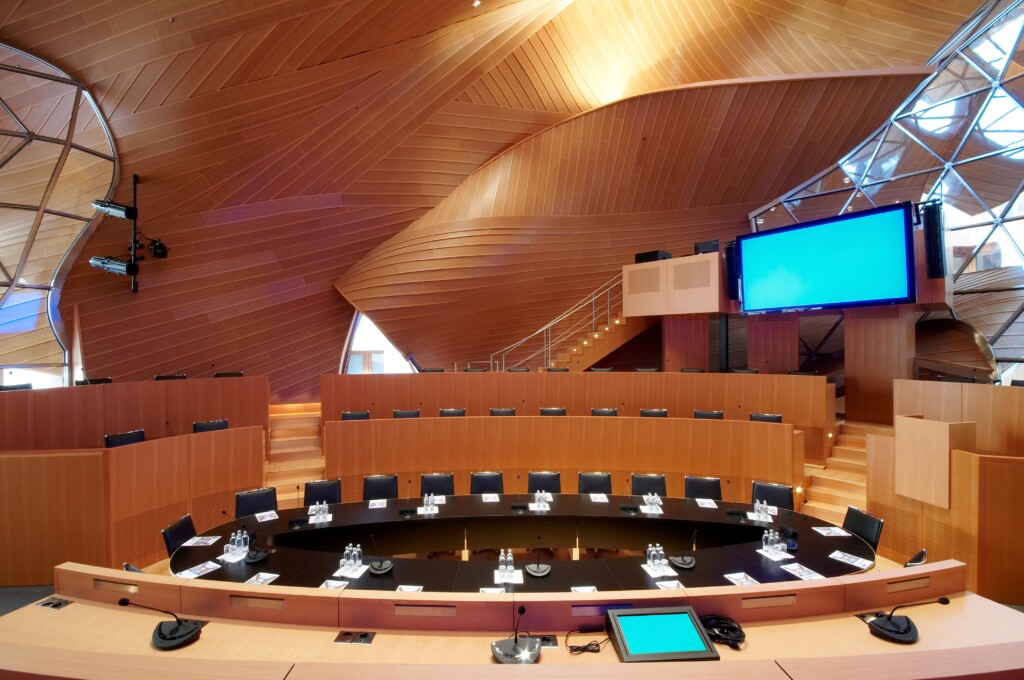 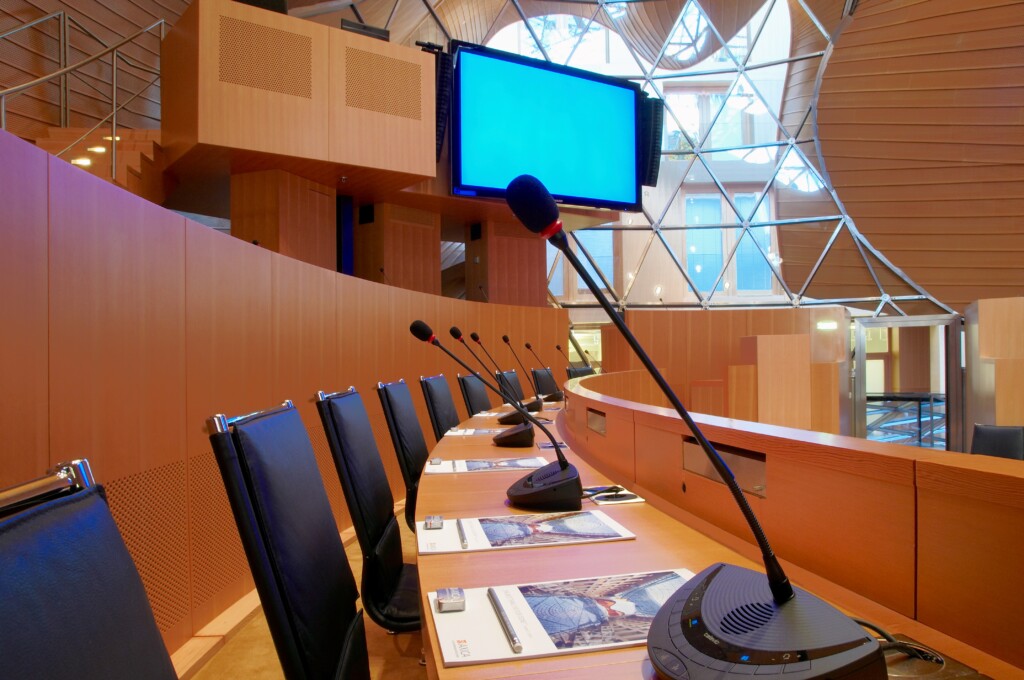 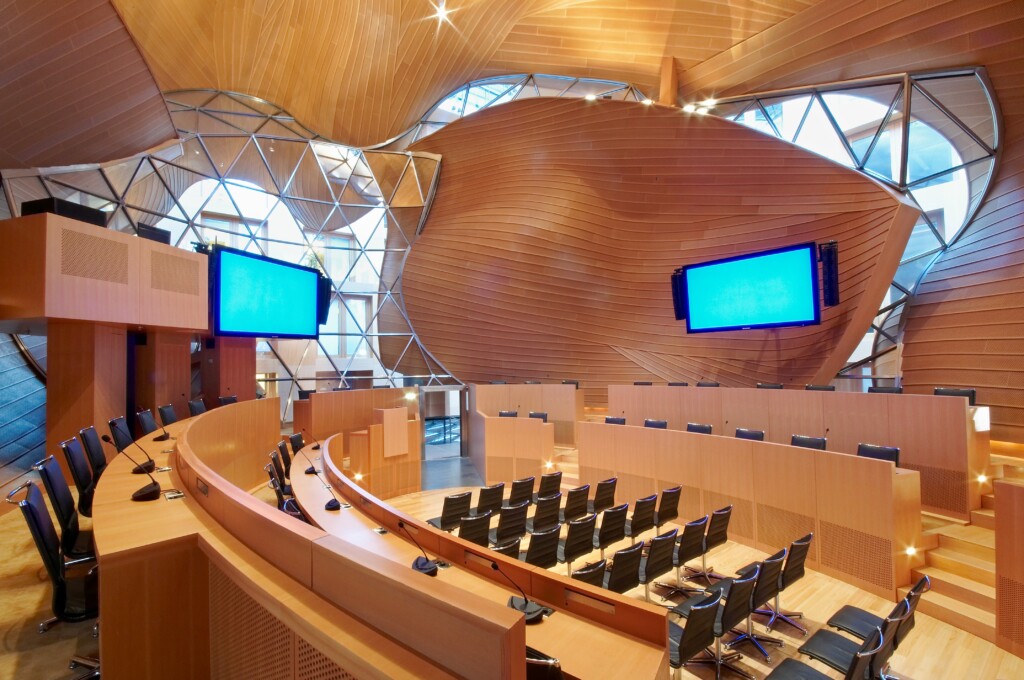 YOUR LOCATION IS OUR CHALLENGE!

Regardless of whether you are planning a new building, converting a factory or modernizing an existing location, we will help you with the new concept for your premises.

With our investments in event technology and infrastructure, we relieve you of the financial risk.

An outside view is often helpful when planning or modernizing an event location. We obtain this perspective and often recognize opportunities with added value or unique selling propositions.

Thanks to the many years of looking after locations of all kinds, we have a competent team of specialist planners who will also accompany you through the necessary and sometimes complex approval procedures if required.

The Ordinance on Places of Assembly – a book with seven seals that we know how to read. We know all security-relevant aspects that must be considered when building and operating a location.

We have the staff you need to operate your location with legal certainty.

We regularly check our technical installations in your location and thus recognize at an early stage the need for replacement, repair or optimization of the components.

We support and advise you in the offer and negotiation phase with your customers.

As a location operator, we provide you with a permanent project manager for all technical, operational and contractual matters.