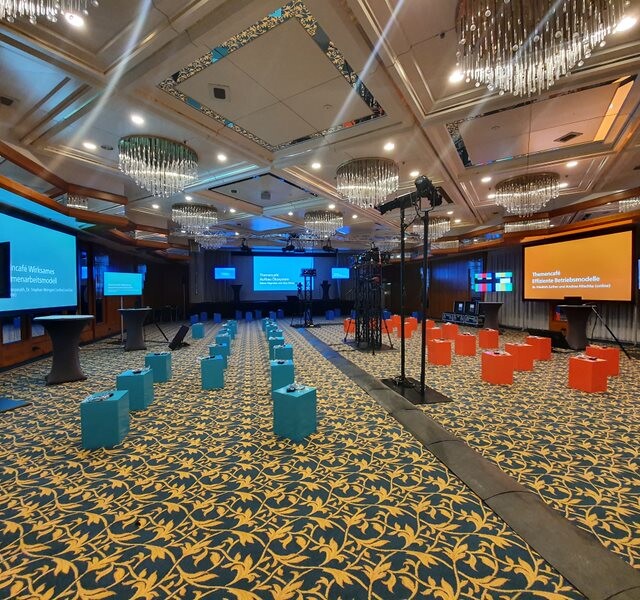 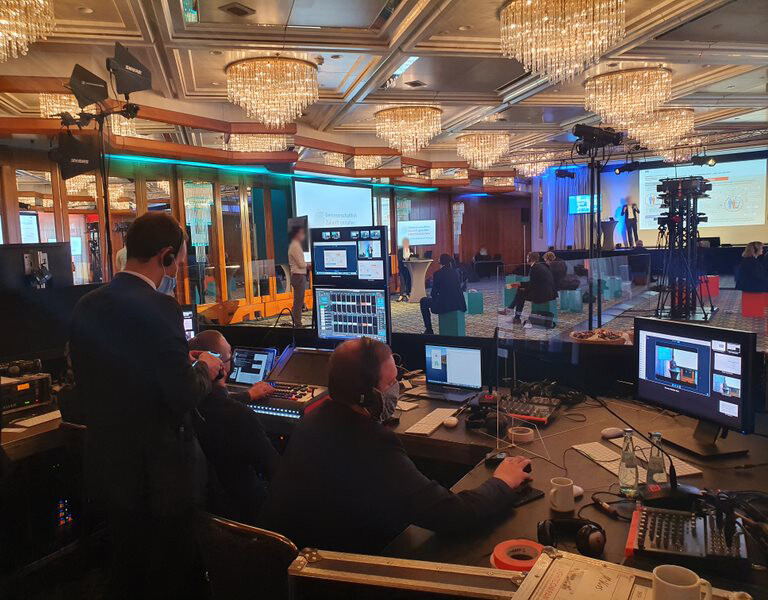 "MAY TOMORROW COME. WE WILL CLEAR THE WAY."

Last year The National Association of German Cooperative Banks (BVR) organized regional conferences for its members in several German cities. The forward-looking adaptation of the strategy of the cooperative banks was presented at the regional conferences. Due to Corona, the regional events, which originally started as a face-to-face event in spring, have been converted into a hybrid event format.

How do you turn a successful face-to-face event that requires a high level of engagement from the participants into a successful hybrid format? How can approximately 800 cooperative banks be reached when the number of participants is strictly limited, and the participants are not allowed to rotate during the event? Together with the BVR and the EGC Eurogroup Consulting AG, satis&fy developed a high-quality, hybrid workshop format that aimed at maximum participant involvement. Three regional conferences had already taken place in Berlin, Wiesbaden and Oldenburg in the spring. With the outbreak of the corona pandemic, it was clear that the conferences could no longer take place purely as face-to-face events. But they wanted to stick to the workshop concept also within the hybrid format. “It was important to the federal association,” explains satis&fy Junior Project Manager Dalwhin Dijkstra, “that the new format only differs slightly from the events that have already taken place and that it is meaningfully supplemented where it is absolutely necessary.” Therefore, the focus was mainly on the location, a well-thought-out hygiene concept and the integration of digital tools to increase participation. According to the project manager, the latter was particularly important to the BVR, to give participants, the opportunity to contribute ideas and suggestions virtually. The idea behind the workshop concept, which was carried out by satis&fy at the Düsseldorf, Hanover, Pforzheim and Ingolstadt locations, was: all on-site participants as well as online participants were assigned a group in advance and were divided into three themed cafés. These were subject to a color code that ran like a red thread through the entire event. Online participants dialed into the virtual room according to their color assignment and were connected live via video camera. “We originally planned with a larger number of participants on-site. Then the corona measures were tightened and only a third of the number of people was allowed,” says Dalwhin Dijkstra. The top priority was the safety of all participants on-site. The task was as simple as it was complicated: How do you manage to get a lot of people to work together in a room with both a main stage and themed cafés without endangering the health of the participants? “The participants on-site were directed to their respective themed café immediately upon arrival. Colored stools marked the participation in the workshops for the attendees, “explains Dijkstra. In addition, in compliance with the Corona regulations, the participants were not rotated. “No one could leave their place. Instead, the themed cafés revolved around the participants,” said the project manager. “Each area also had its own food and drink station. One could therefore get food and drinks on-site during the rotation period without leaving their spot. “

All workshops required active participant engagement. But can interaction as well as the exchange of ideas and opinions succeed when offline and online participants meet in a workshop format? Dijkstra answers this question with a resounding yes. While on-site attendees were provided with headphones to follow the content of the themed cafés, online participants were able to connect to the Go.Control event platform. This resulted in high participant involvement. “Not only was the live stream embedded on the platform, but access to the themed cafés was also handled via the platform. In addition, there was the option to provide real time feedback on centrally asked key questions via mentimeter – both on location and remotely. Word clouds and surveys were also used to measure acceptance of the project results presented in the workshops. A chat function was available to online participants if they had questions. They also had the option to activate their cameras in the workshops. Communication via image and sound was also possible within the workshops, which were controlled via the web conferencing tool. A host coordinated the whole thing in the background. The web conference was also shown live on a screen in the plenary.” All interactions took place directly and easily.

The workshops were complemented by an opening and closing plenary session that took place on the main stage. The BVR was impressed by the technical implementation of the hybrid format of the regional conferences. “It was a great challenge for us to convert the very special, balanced event concept for the regional conferences ‘on-site’ into a hybrid format in a short amount of time due to corona, which on the one hand guaranteed equal participation possibilities of all participants both on-site and online, and on the other hand offered flexibility with regards to the constantly changing framework conditions resulting from Corona legislation,” says Martin Buth, event manager at BVR. “Due to our long-term partnership with satis&fy, it quickly became clear that we would also successfully solve this problem together.” At satis&fy, everyone was impressed by the speed at which the BVR moved ahead with planning. “The BVR was brave and creative in choosing its hybrid strategy and has managed to merge worlds offline and online and turn a successful analog event into an innovative hybrid event,” praised the satis&fy project manager.

satis&fy was responsible for the production of the event furniture – seating was specially made for the events – as well as for administration, participant support, setting up the hybrid platform and providing the event technology to the content design in cooperation with the consulting agency EGC and location management. 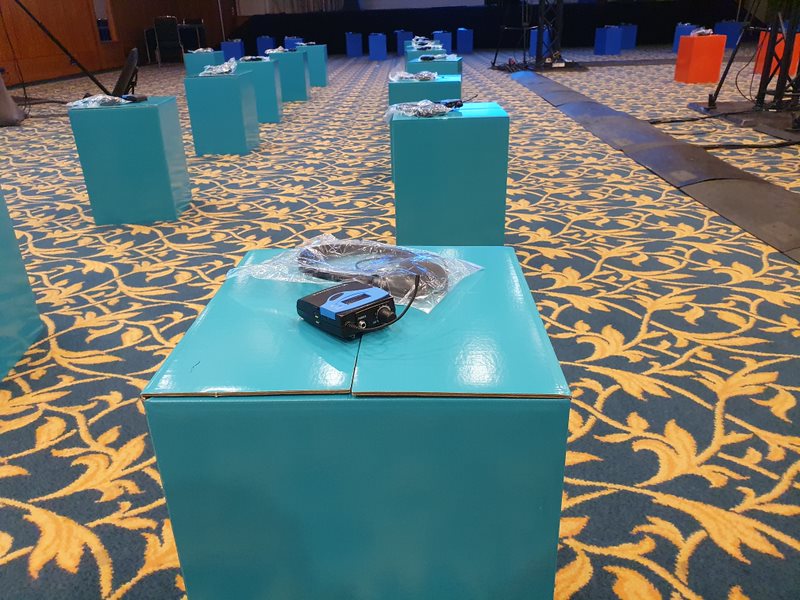 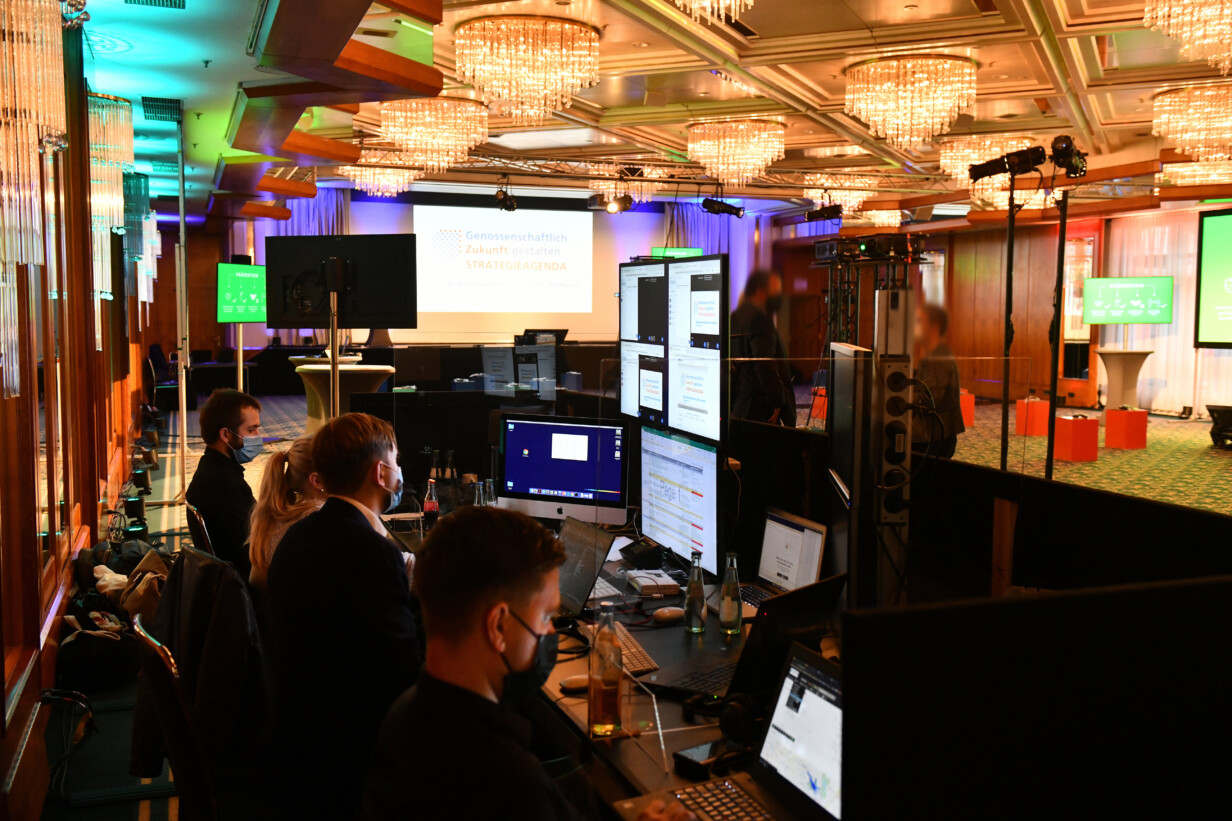