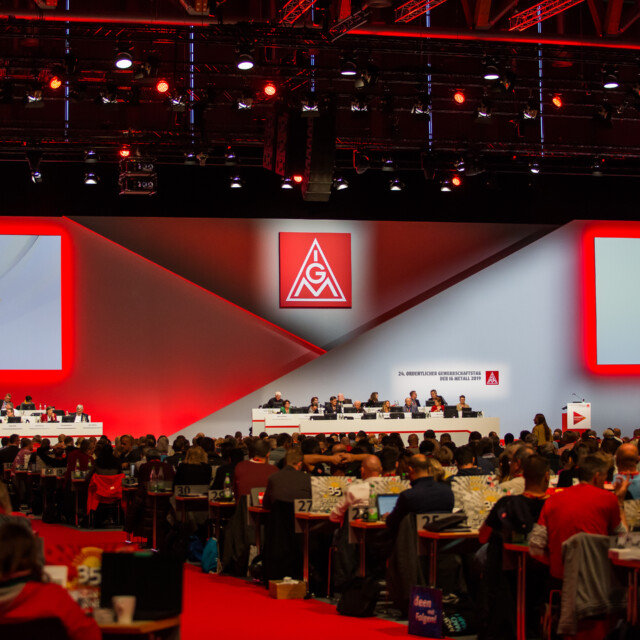 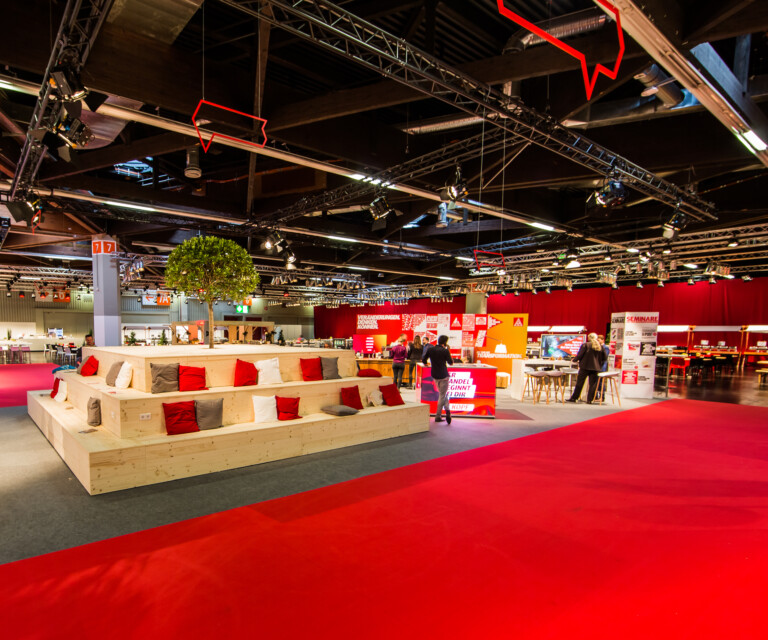 In 2019, satis&fy AG once again accompanied the Ordinary Trade Union Congress of IG Metall after 2015. The complex large-scale project was managed holistically, which ensured a smooth process on site.

The 24th Ordinary Trade Union Congress of IG Metall was held in Nuremberg from October 6 to 12, 2019. The union’s highest decision-making body meets every four years and defines the focal points for the coming years. In addition, a new executive board is elected. In 2019, the trade union conference was held at the NürnbergMesse under the motto “Together for tomorrow” and, in addition to the conference, also included a generously sized exhibition and an evening event in the Meistersingerhalle.

All from one source

For Frank Herrmann, Head of Organizational Development at IG Metall, it was important to have “a technical partner who understands our thinking and our needs and can offer suitable solutions at any time. After a pitch, satis&fy AG was entrusted with therealization of the large-scale project. “The client made a conscious decision to source all essential services associated with the event from a single source,” explained Björn Kowalzig, Senior Technical Director at satis&fy.

“In this way, the direct path between idea, planning and implementation was taken: We knew the available budget and were able to develop a design that conformed to it. On top of that, our many years of experience in implementing large-scale events mean that we know what is technically feasible and sensible for an event of this kind.” According to Kowalzig, they were involved in all event processes, from the initial design considerations to the follow-up, and always tried to “meet the client’s vision as precisely as possible and stay within budget.” 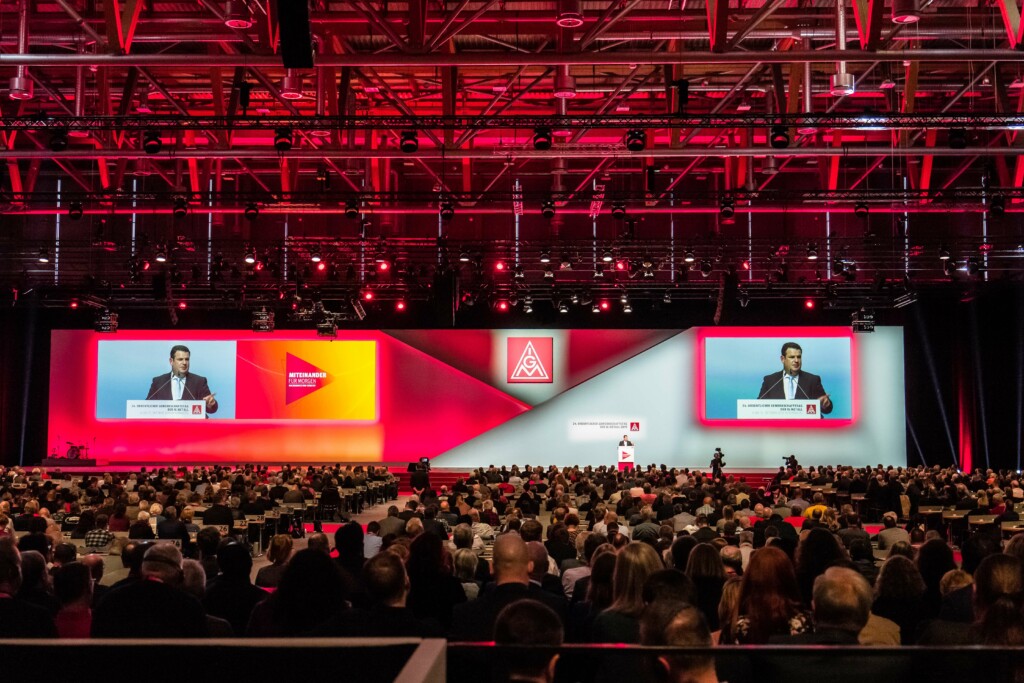 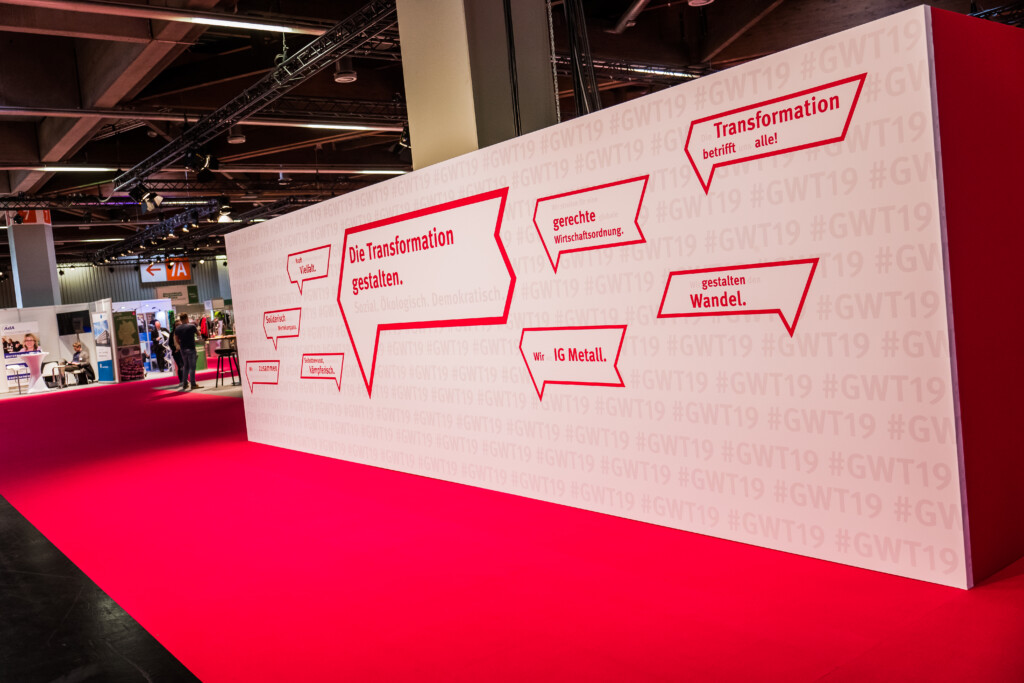 For the trade union conference, a high-profile implementation and a coherent weighting of the functional and design elements were required. Creatives from satis&fy developed a design that ran through all aspects of the event like a common thread. The visual language, for example, was derived from the union’s distinctive triangular logo. The catchy branding was to be discovered everywhere in the NürnbergMesse: Among other things, “speech bubbles” (aluminum profile frames covered with stretch fabric) with IG Metall claims floated at a lofty height. The claims were also attached to window fronts and doors, and guests were greeted as soon as they arrived at the exhibition center with the key visual, which was emblazoned on the glass facade in the form of oversized foil plots.

Plenum in Hall 7A

The actual meeting took place in the 8,850 m2 hall 7A of NürnbergMesse. The 483 delegates were joined by numerous national and international guests and representatives of the press. The eye-catcher par excellence was the three-dimensional stage set, in the center of which the accentuated IGM logo was emblazoned. To the right and left, large backdrop polygons had been erected, into which two projection screens (widescreen in 3.5:1 format and a singlescreen in 16:9 format) were integrated.

In order to optimize the use of the screen and to be able to show all decision-makers the possibilities of the stage design in advance, the setting and screen layout were visualized with drawings and simulated in the satis&fy showroom with the help of modern digital technology. As a result, a perfectly coordinated preset list for the graphic direction was already available at the beginning of the rehearsals.

The red tones, which dominated the color spectrum used at the event as the CI color of IG Metall, were naturally also reflected in the lighting. The latter relied on larger quantities of head-mounted LED lamps: “In addition to considering which spotlights made sense to use for technical and creative reasons, the connected load for the lighting that had to be ordered from the trade fair naturally always played a role,” says Björn Kowalzig. “In the interest of the customer’s budget, it seemed sensible to keep the number of power connections as low as possible. We were able to ensure that with the LED spotlight models chosen for audience lighting.”

Special moments during the conference period included the opening event (moderated by news anchor Linda Zervakis; speeches were contributed by Federal Minister Hubertus Heil and Nuremberg’s Lord Mayor Dr. Ulrich Maly, among others) and a visit by German Chancellor Dr. Angela Merkel, which was accompanied by extensive security measures. Here, too, satis&fy’s project management provided comprehensive support in the run-up to the necessary coordination meetings. In addition, walkways, control points and restricted areas were visualized. All project participants were provided with an overview that helped them to routinely master the challenging moments. 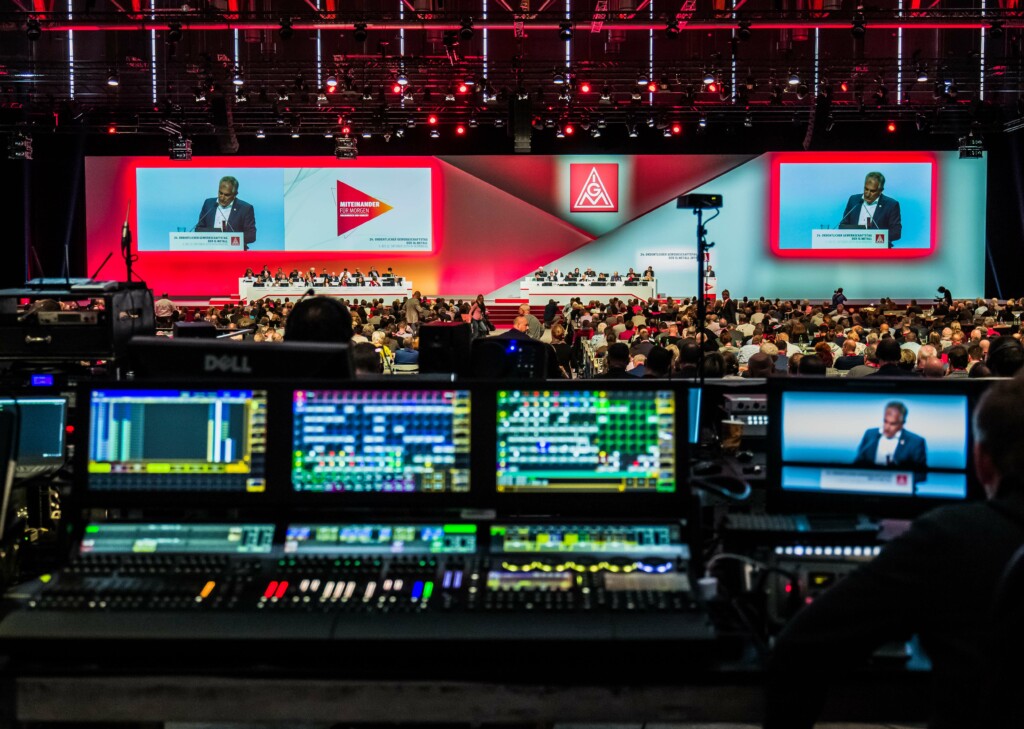 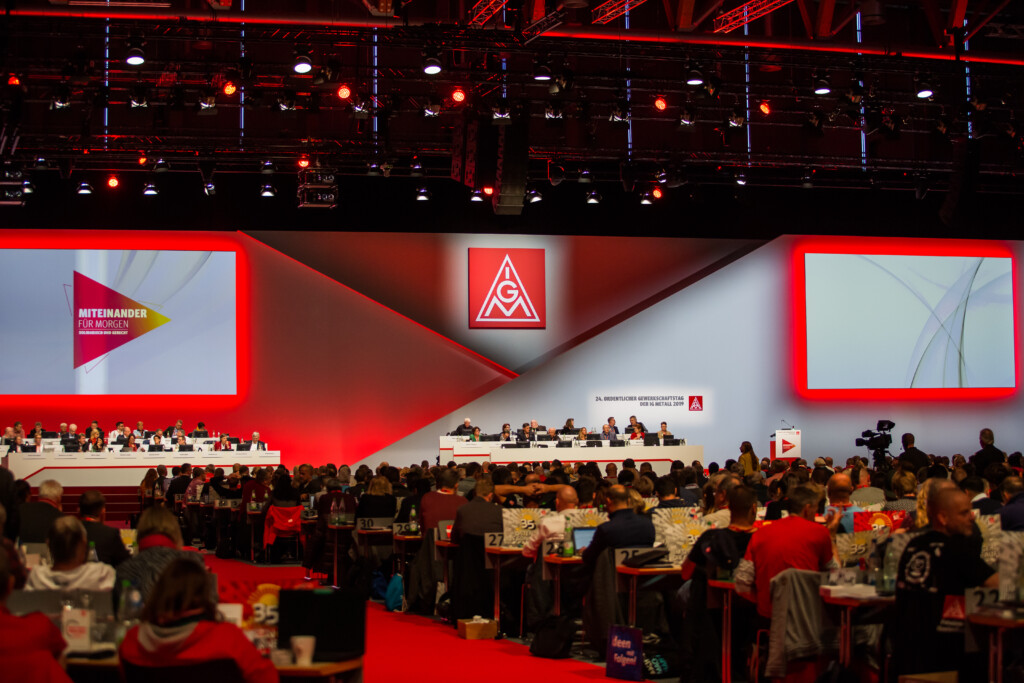 An exhibition had been set up in Hall 7, adjacent to the conference area, for which Jonas Gido was responsible as satis&fy’s technical manager. The exhibition was divided into an exhibition area with 57 stands and a catering area for the delegates. In the center of the hall were nine large district stands of IG Metall, between which three-tiered wooden pyramids made by satis&fy served as communication areas. Smaller stands of external partner exhibitors, erected with a typical trade fair construction system, were grouped around the district stands. “In addition to the exhibition concept, we were also responsible for the construction, furnishing and lighting of all stands in Hall 7, which resulted in a homogeneous and high-quality appearance. To create this uniformity, the entire exhibitor management ran through us,” reported Kristina Kuhn, who was responsible for project management in Hall 7. “We took care of the invitation correspondence, coordinated stand sizes, developed the layout from this and provided the exhibitors with a service catalog for individually equipping their stands. We invoiced each exhibitor separately. This meant we were able to take a lot of pressure off our customer in terms of handling the trade show landscape.” 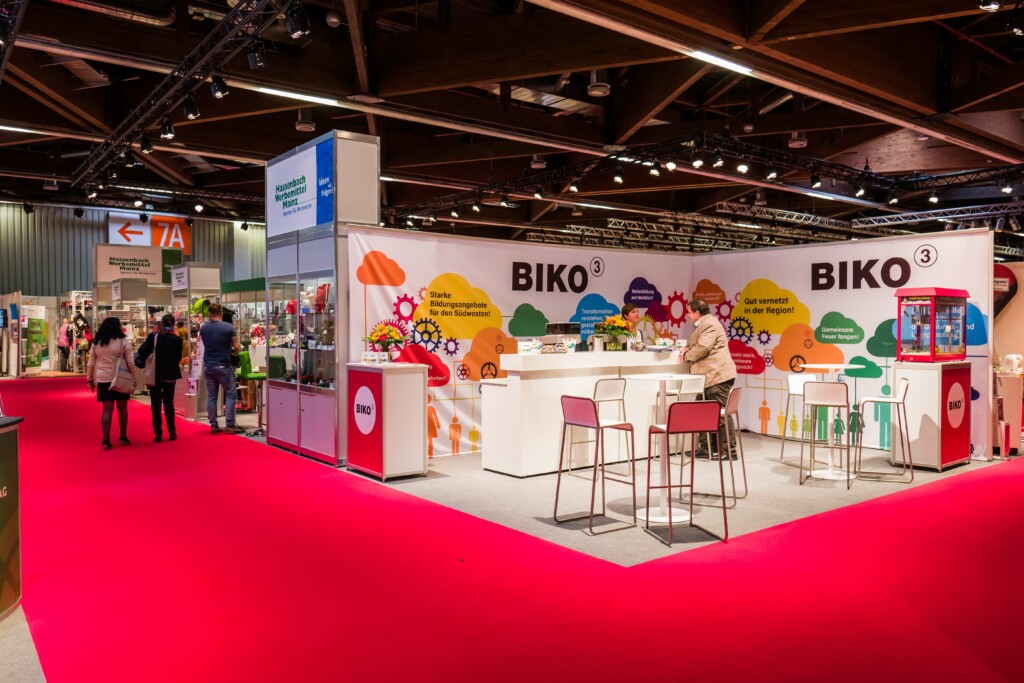 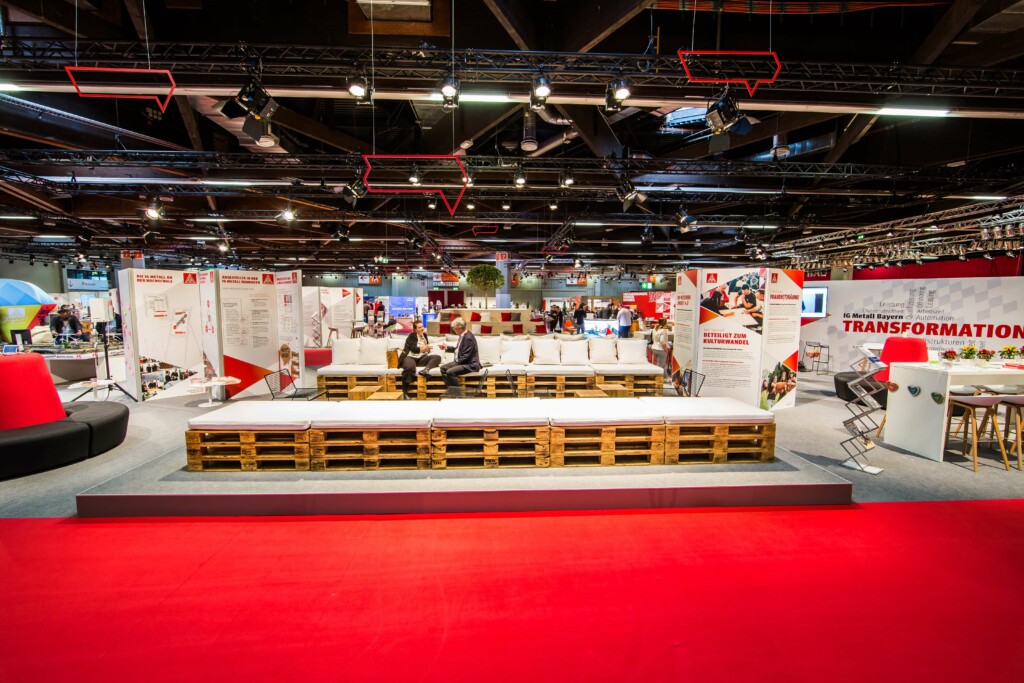 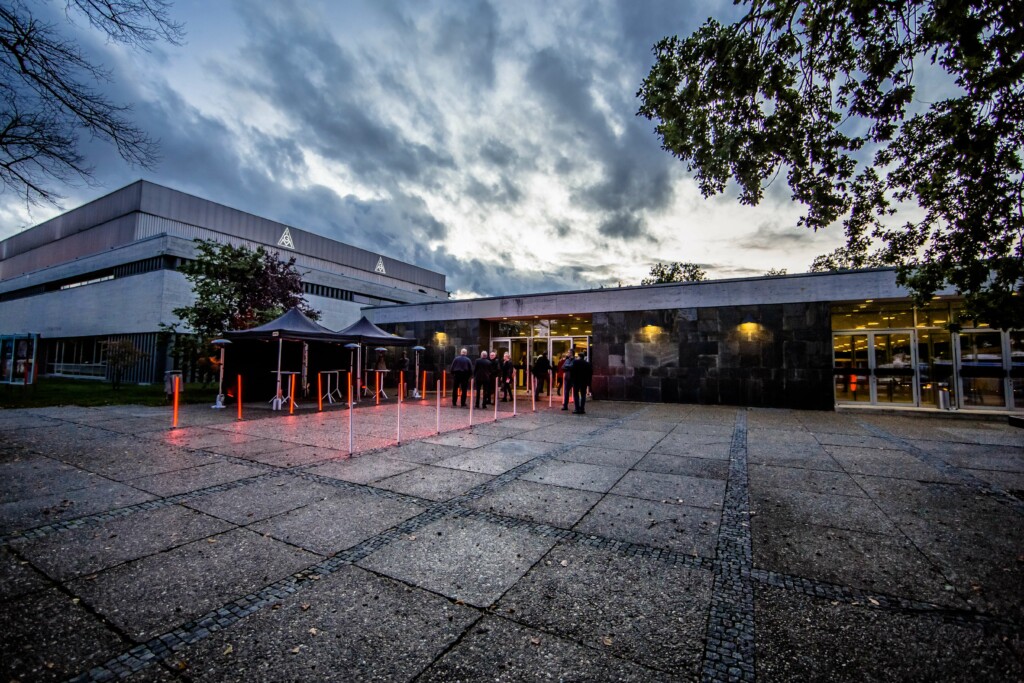 The NürnbergConvention Center Ost (18 rooms and halls on four levels, open gallery areas), which opened in 2005, housed functional rooms required for the success of the seven-day event: Back offices, the offices of the board members and more. Various rooms were supplemented with elements from the temporary trade fair construction, creating additional space. The NCC East was also the venue for events: On the opening evening, catering was provided here on two levels, as the exhibition area was not yet accessible to delegates at that time. On Thursdays, the so-called “Parliamentary Evening” was hosted on levels 0 and 1 of NCC East, with the CDU/CSU, SPD, Die Linke and Die Grünen inviting delegates to political debates in different rooms.

“In close coordination with IG Metall, we defined the room usage and layout in our extensive room books,” says Isabel Winkelmann-Grm, who worked for satis&fy as Overall Project Manager. “This also included keeping a constant eye on the trade fair’s furniture inventory on behalf of the customer and comparing availabilities in order to make cost-optimized decisions about which additional equipment we needed to bring in. In detailed increase and decrease overviews, we supported the customer in budget control and provided a basis for his budget decisions.”

“IG Metall remains a social force with a clear compass,” was the conclusion of second chair Christiane Benner at the end of the seven-day conference marathon. “Whether in the plants or in politics, we will certainly not run out of work,” stated the functionary, who in 2015 was the first woman to be elected to the leadership of the male-dominated industrial union. “We are right on target with our topic, the great transformation of work, society and the environment.” The satis&fy team also didn’t run out of things to do during the seven-day event: The “total package” put together by satis&fy also included various add-ons, the importance of which for the well-being of the conference participants was not to be underestimated: guests arriving by train, for example, were given a friendly welcome at Nuremberg’s main train station on Sunday before the start of the event with a specially set-up information stand. All in all, the IG Metall trade union conference went off without a hitch, which was probably due in no small part to the professional preparation. “The customer was very satisfied, as we were able to significantly relieve them in all aspects of the event organization,” Isabel Winkelmann-Grm was pleased to say. “Since we were already active with satis&fy four years ago for IG Metall at the trade union conference in Frankfurt, we knew quite well what to expect – this circumstance contributed to a comparatively relaxed preparation phase.” From crew circles, it was heard that they are now eager to see whether they can take “the good vibrations from Frankfurt and Nuremberg” to the next Ordinary Trade Union Congress of IG Metall in four years. 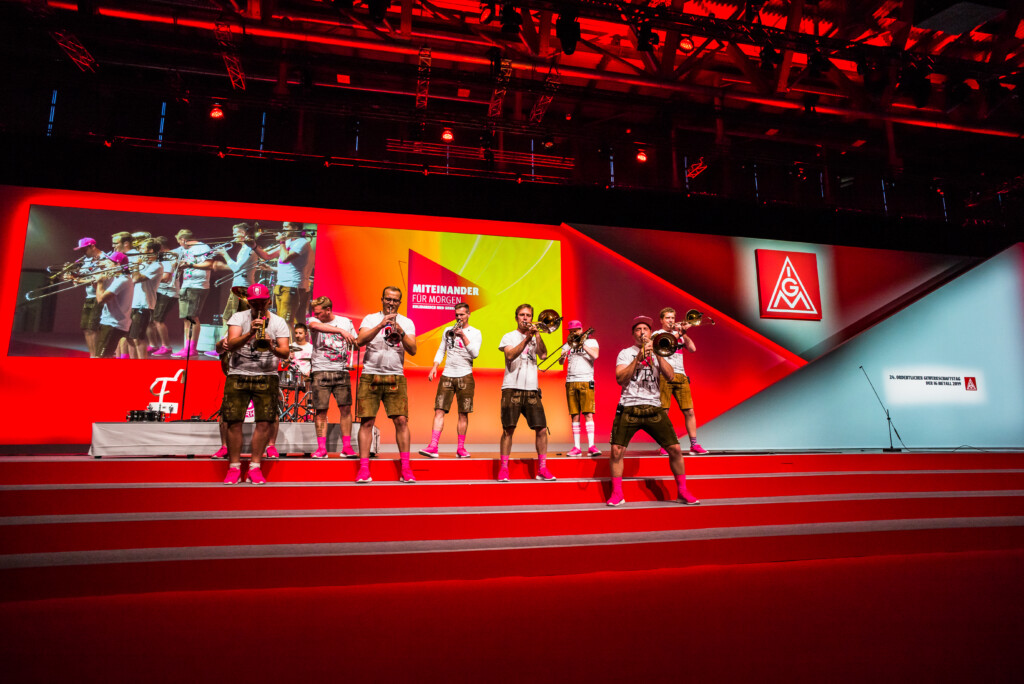 Your show is our challenge!

From annual general meetings and award ceremonies to product presentations, dealer conferences and international roadshows – we plan corporate events of every shape and form at home and abroad, from the initial ideas to the follow-up.