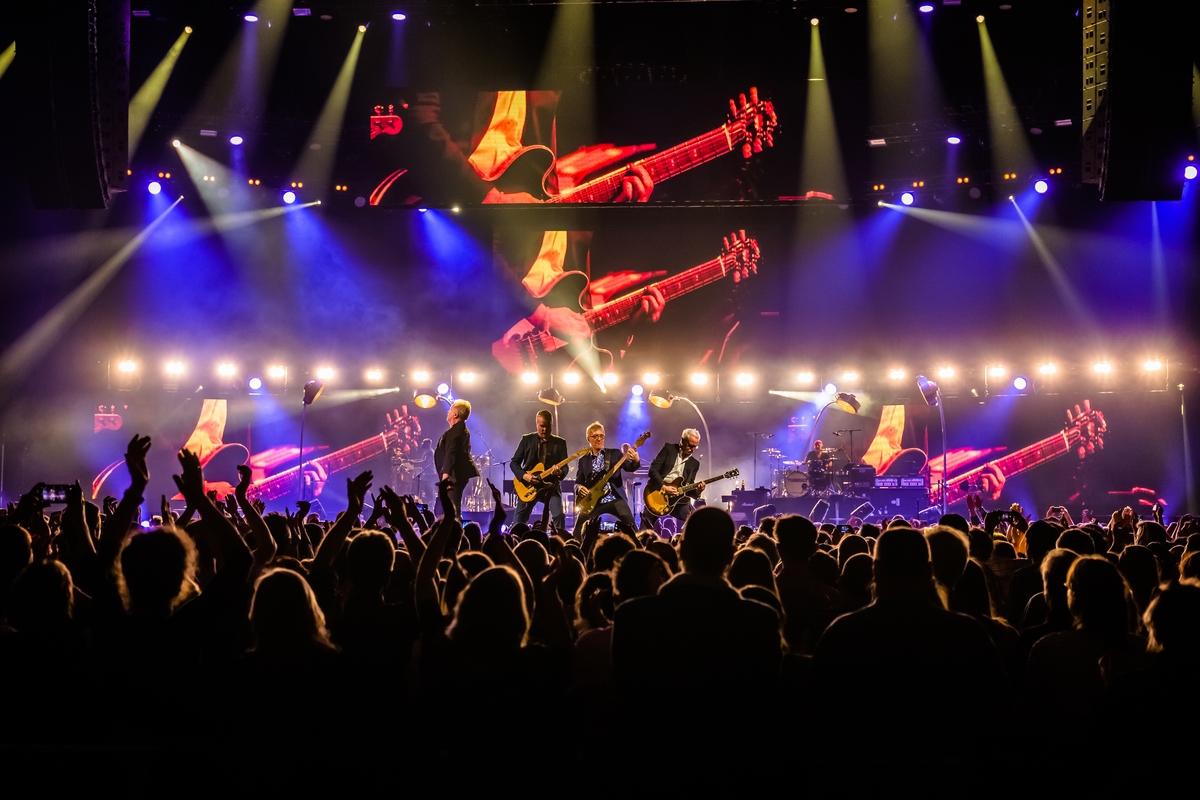 A festival for eyes and ears

When CUE Design’s Gunther Hecker got the nod to mastermind the stage show for Herbert Grönemeyer’s recent arena tour, his brief was very clear: The stage and the arsenal of satis&fy equipment and custom builds on and around it were not there to show off technical fireworks. They were there to put the artist front, center and in the spotlight. This was to be a platform for Grönemeyer’s personality to shine. As the audience from first show on March 5 in Kiel to the final concert on April 1 in Amsterdam would attest, that plan sure panned out.

Serving as the backdrop for the main stage, six 3×2-meter LED screens arrayed in a semicircle streamed live images and videos. A moving propeller with LED screens circled above to cover the tiers on the left and right. The stage, a special build with a soft edge rounded at a 45° angle, featured catwalks, custom stairs and ramps for the musicians and Grönemeyer to roam in all directions. The middle catwalk extended deep into the audience area. At its far end was another stage with a piano that would occasionally surface, flipping back under the stage to be stowed away upside down. That was it for the technical trickery – no other pomp, circumstance or fanfares distracted from the artist. This gig was all about intimacy and the connection between artist and audience

For the Patt-Light arc lamps, satis&fy had developed a flange mounting on the LiteDeck that did not require base plates and allowed flexible alignment of the lamps. The cable position was inside the gooseneck tubes, which were specially manufactured for the tour.

Furthermore, new LED-based spot lamps/beamer lamps were used – as an alternative to the BMFL series from Robe or Martin MAC Viper. For this, there was a shoot-out including simulation at satis&fy in Karben beforehand. Gunther Hecker’s requirement: brighter and softer color transitions, preferably no pre-glow. The choice fell on the Khamsin from Ayrton. Instead of the usual spots in the tiers, there were ground control spots, whose multitrack controllers can control three spots each. 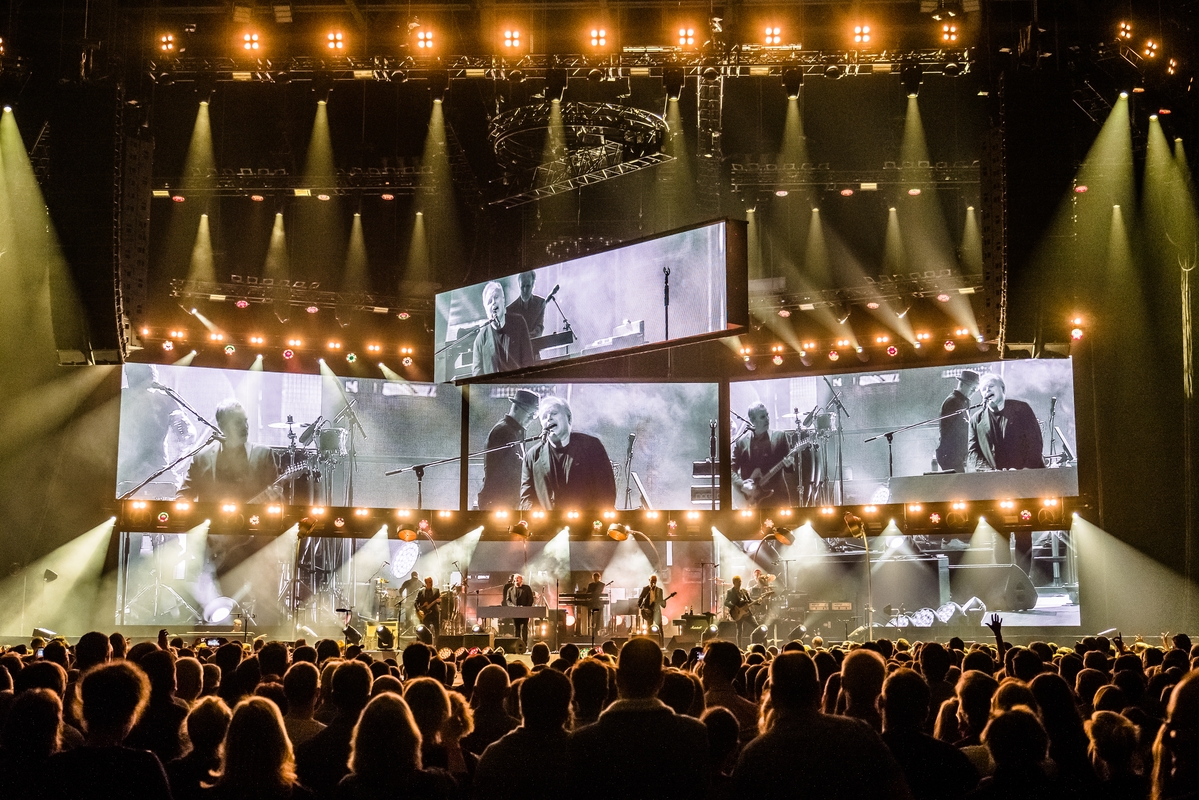 The special cabling for this (with a possible signal transmission over a distance of up to one kilometer) also came from satis&fy, as did the special constructions for the LED screens. The wind-moving propeller screen, for example, was fitted with LEDs on both sides and was designed and manufactured entirely in WERNE in cooperation with AREA 4 Industries – as was the LED wall with its smallest possible special supporting structure.

This supporting structure can be used modularly and can also be scaled precisely for other events. Other special constructions and in-house developments were the five staircases including flexibly attachable handrails for the Litedeck stage system, which are also compatible with Bütec and Layher. Specially designed ramps provided leveling transitions from the catwalks to the stage.

New: the T-beam system with hole grid, which can be integrated into the TT truss to suspend motors. On the lighting side, there were also 2×30 watt lasers (RGBW) with DMX connection from Lightline in Osnabrück and new P18 washlights. The action was captured by three manned cameras connected via server and by a handheld camera – for the live images on the LED screens.

Time and cost savings during set-up and dismantling were provided by special packaging: on the one hand, based on Cargo Cart’s dolly system and, on the other, in the form of the LED propeller’s transport suspension system, which was manufactured by SchokoPro in accordance with satis&fy specifications.

Herbert Grönemeyer came up with the inceptive idea for this show.

It was to capture the vibe of his current album TUMULT in a friendly, down-to-earth way with true pop appeal. Arty pretensions, superficial designer frills, FX fireworks that would overwhelm the audience – all that was a no-go.

Grönemeyer and Hecker bounced ideas back and forth for three quarters of a year until all the pieces came together. A team of seven including Hecker and three satis&fy staffers, developed the video content for the show. The satis&fy personnel also helped with the art design. 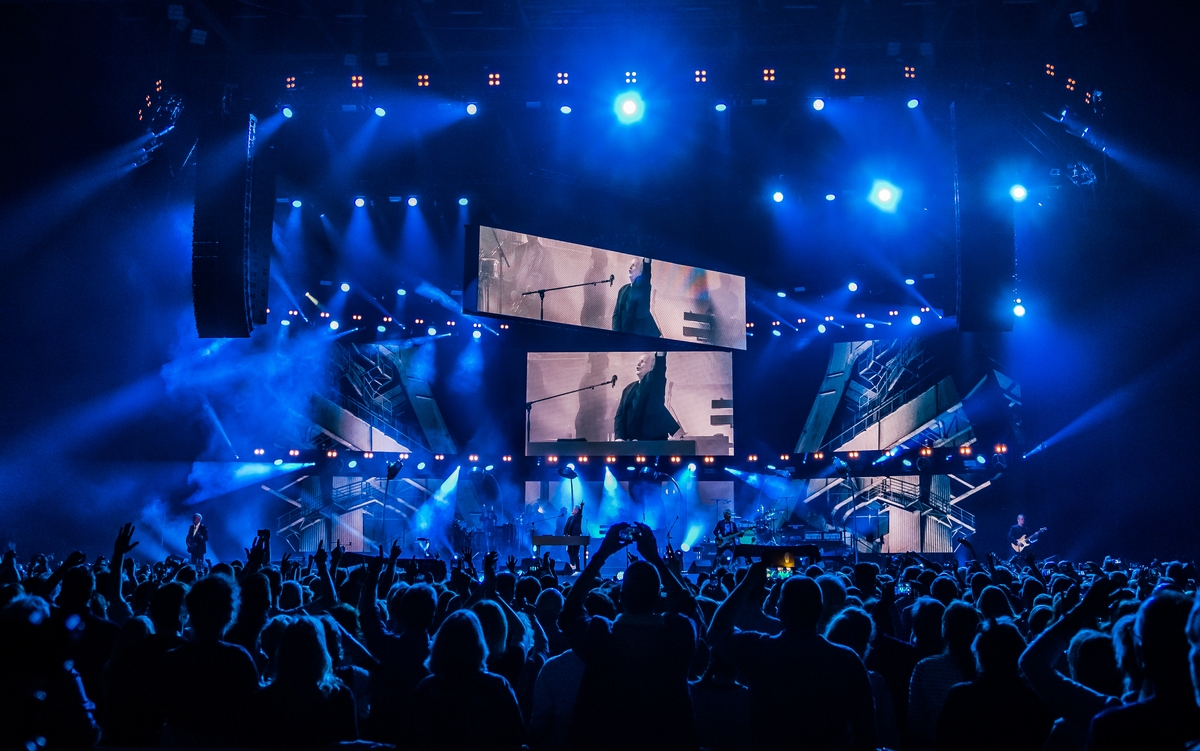 The crew set up and tore down the stage in trial runs held prior to the tour in satis&fy’s rehearsal studio at Werne. The rolling Litedeck-based stage expedited setup out on the road. The lighting team was able to rig the LED screens and LED propeller while the stage crew assembled the platform and backline. Once the screens and light trusses were up with the propeller hanging from the venue’s ceiling, the crew simply pushed the stage under the lighting and video rig.

The timing of it all was tight. The crew had two-thirds of the stage assembled in the middle of the arena and three of the four LED screens rigged and flown by 11 a.m. The backline was up and the LED propeller rotating at a lofty height by 12:45 p.m. At 1:15, they pushed the stage under the trusses. Showtime was 8:10 p.m. sharp every night. A scant few minutes later, the communal spirit had already blurred the boundaries between audience and artist. Together, they would become the evening’s protagonists, just as the artist had envisioned. 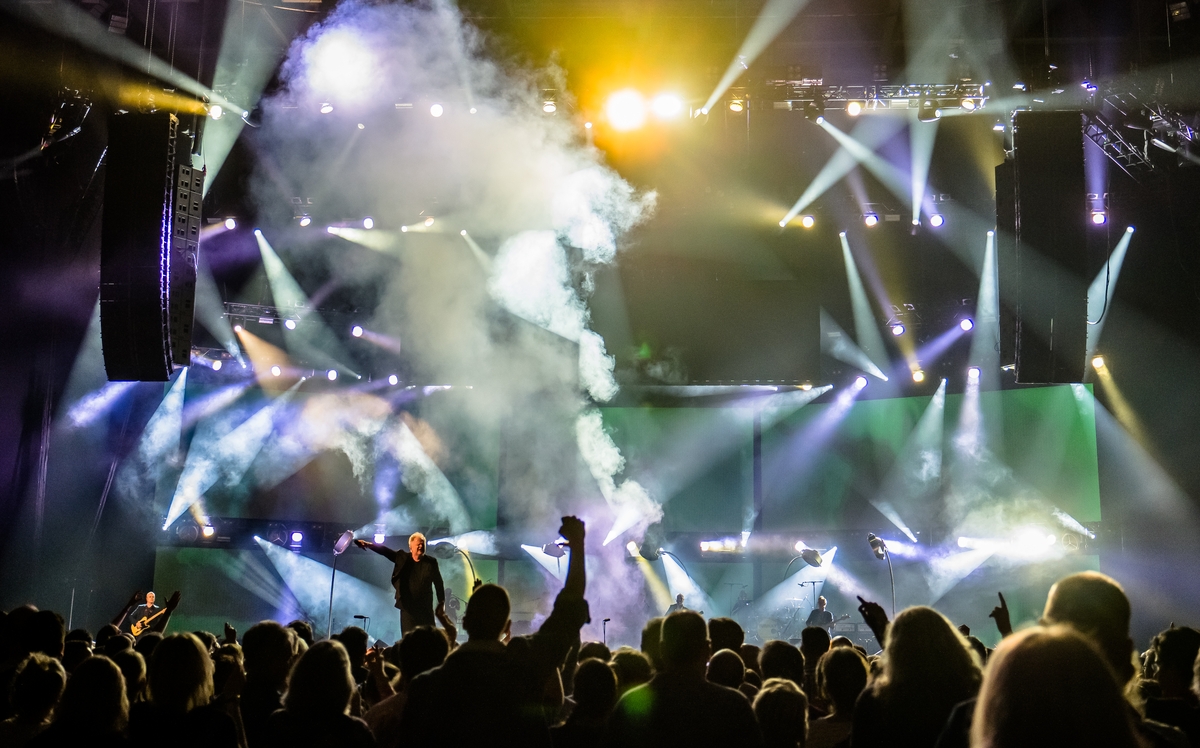 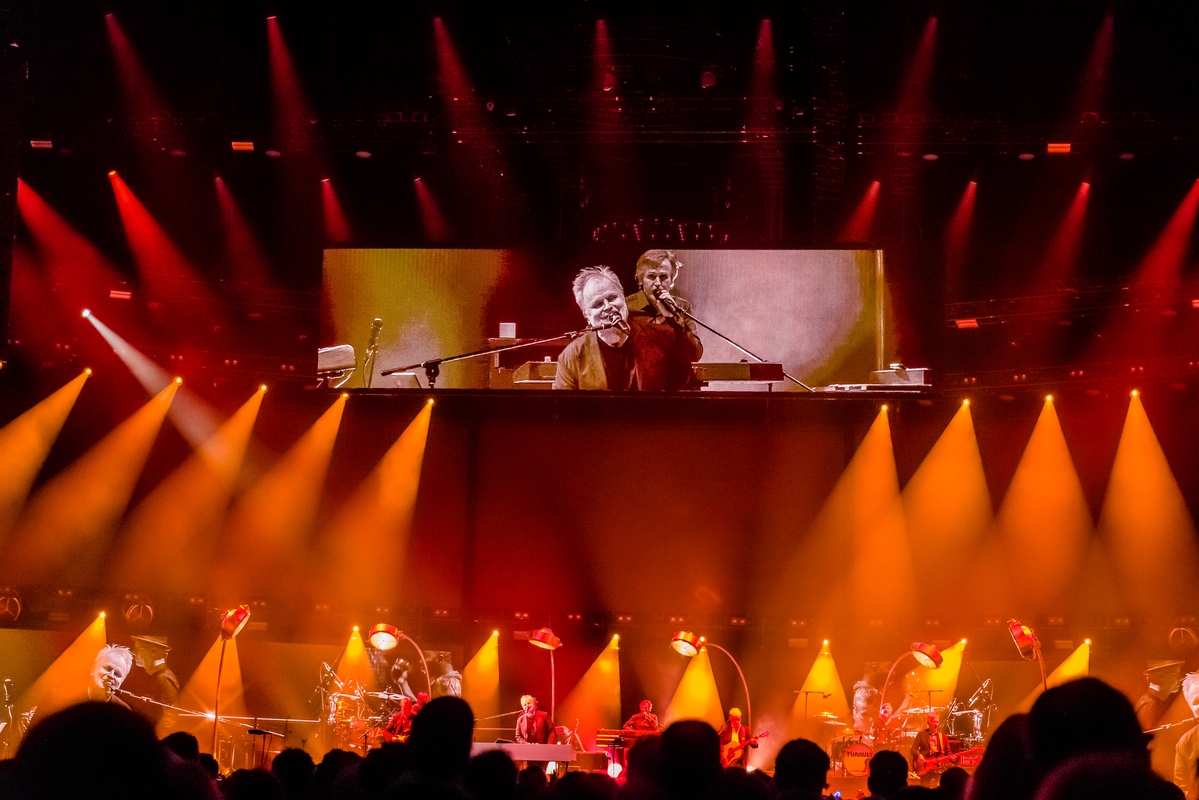 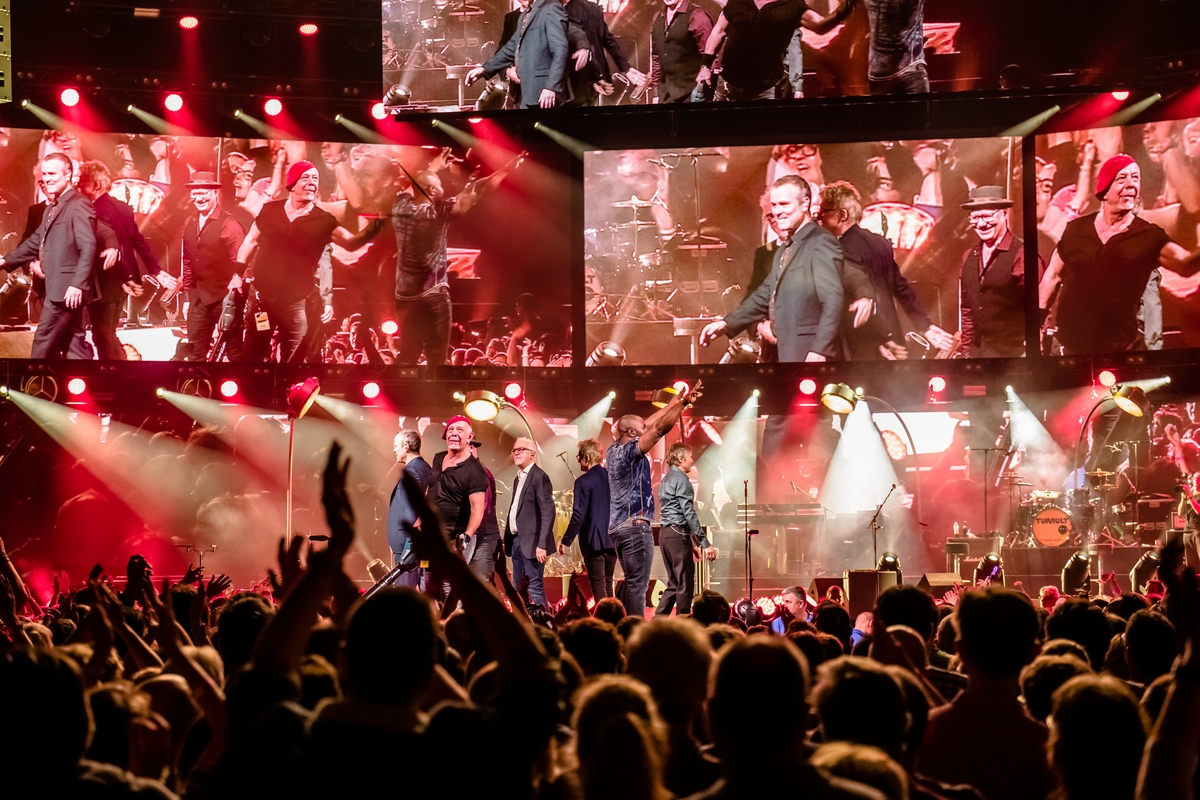